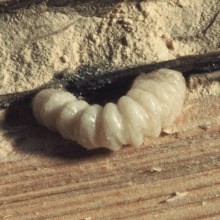 Treating timber against the Capricorn beetle: interest and steps

The Capricorn beetle, from its Greek name Hylotrupes bajulus (that drills wood) is a xylophagous larva insect of the Cerambycidae family in the order of the coleoptera.  Its larvae especially like resinous timber, especially when it has already been processed (i.e. bark removed and sawed), and therefore readily grows in the timber used in housing. The application of a suitable Capricorn beetle treatment therefore makes it possible to make the timber used in the interior design and the structure of the building better withstand Capricorn beetle larvae attacks.

Once Capricorn larvae have been laid in the timber, they feed on the cellulose, causing damage that can lead to the loss of the mechanical properties of the timber elements under attack. In the case of a roof structure for example, the collapse of the roof can be envisaged.

Timber is treated against Capricorn beetle larvae by surface application and, in the case of a serious attack, by injection.
The application of the surface treatment creates an effective barrier on the timber element that will prevent the larvae that are laid from growing. Indeed, Capricorn beetles access the material from the outside and lay their larvae in the grooves or holes at the surface of the timber.

Finally, the application of a treatment against Capricorn beetles by an approved professional guarantees that timber materials will have a performance level to withstand Capricorn beetle larvae for at least 10 years.

Our website uses cookies to ensure that it functions properly and to optimise its technical performance. For more information and to change your preferences, you can click on the "Preferences" button.
Manage options Manage third parties Manage vendors Read more about these purposes
See preferences

We use cookies to optimize our website and our service.
Manage options Manage third parties Manage vendors Read more about these purposes
See preferences